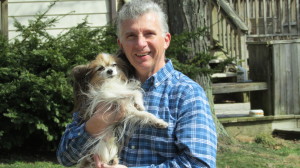 Keith grew up in Delaware with a dachshund name Skipper. Skipper’s big trick that Keith taught him was to sit up to beg–not so easy when you are a standard sized doxie!

Keith was along for the ride at Jeannine’s very first Obedience class she took in 1983. He has been coming to nearly everything with her ever since. Pressed into service when Jeannine’s first class she taught for Dog Training Club of York became too popular. His teaching started in the mid 80’s. He also began training and showing Misty in matches. She was a mixed breed and in those days you could not get any titles.

Later as Jeannine began being asked to judge at show and goes Keith would take the assignments and enjoyed playing Obedience judge.

After Mazzi had his OTCH Keith began showing him in Utility and really enjoyed it. Mazzi covered for all his mistakes in commands and made it look easy. Later after Stiener had 2 legs in Utility Keith took over his training and got 2 more qualitfying legs to get his UD title! After that Keith decided he was interested in Rally-O and has one leg with a first place with Stiener in Novice. He is also working with Willie so he can get some rally titles with him.
Keith has been helping Jeannine with seminars and classes for a while now and also teaches his own pet classes and rally class. He also runs the breed run thrus for Papillonia. Keith has been Jeannine’s main advisor and confident for quite some time and enjoys problem solving with her.

Many of the students at Papillonia love to work with Keith because he is so patient and encouraging and he has a great sense of humor.