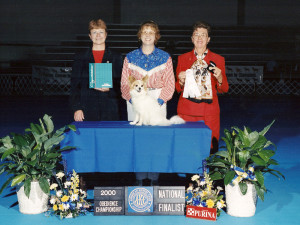 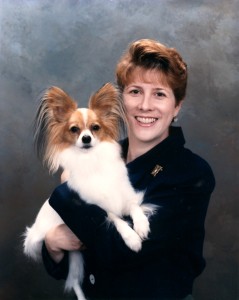 ABOUT MAZZI: “Mazzi” started his career with tracking getting his TD very quickly and easily. Mazzi had 9 firsts in Novice including two all breed HIT. He continued his success by getting a 199 in Open on his first leg. If possible he was an even more enthusiastic Utility dog finishing his title in just 4 shows with the last two legs being a 198 and a 198.5. He quickly completed his OTCH and UDX. He had 16 HIT and 7 high combines. He was Top Obedience Achievement Papillon PCA 1999. In 1998 he was ranked #4 Papillon for Canada’s top Obedience dog Award after just 3 shows. Mazzi placed in the top 10 at the prestigious 1996 Cycle Pup-Peronie Eastern Regional Championships Novice division. In 1999 in the same tournament he placed 2nd in the Utility division. Mazzi was invited to and placed in the top 4 in the Toy Group at the 1999 and 2000 AKC National Obedience Invitationals. He ranked numerous times in the top 3 in the Toy Group of both the Delaney and Shuman systems and was the #1 Toy for 1999 in the Delaney System. 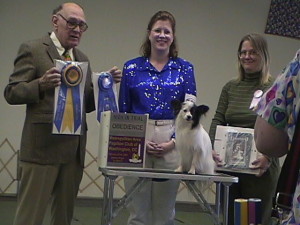 ABOUT GIDGET: “Gidget”, a Papillon, began her career receiving 2 HIT including a perfect 200 score the first day she showed in Canada. In the USA, she won 7 first places on her way to her CD. She went HIT out of Novice at the Papillon National specialty with a 198.5—beating Mazzi in Open B by a half a point. A highlight of AKC Novice was winning a HIT over more than 200 dogs with a 199.5. Her first two scores in Open were 199’s and both HIT. One was at the National specialty making it two HIT’s. The next year Chloe won Open B again at the National getting a perfect 200 score and setting a record still not challenged as of today—3 HIT in a row by one dog. Gidget had 26 HIT and 15 High Combineds. She got 3rd in Open at an Allstar event, placed in the Utility division at another Allstar tournament and she also placed 5th in Super another time at an Allstar Tournament. She went to the AKC Invitational several times with placings in the Toy Group each time. When she was 9 years old she was 12th after the first day all breeds. She had 14 scores of 199 or better. Gidget was at one time third in the toy group All time OTCH points. She is now 5th behind Nicholas. Most importantly she was the love of Jeannine’s life and the perfect dog. 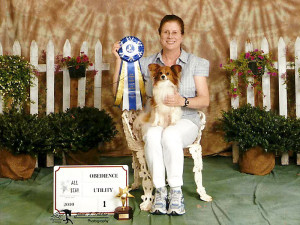 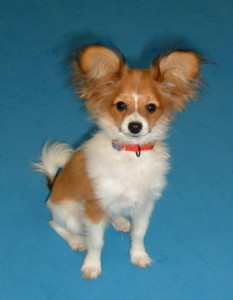 ABOUT NICKY: “Nicholas” has been a joy to show and finds Obedience to be the most wonderful thing in the world! Nicky is always fast, accurate and loves every moment of training and showing. Nicky started out with two 199.5 and a 198.5 to get his CD with 2 HIT. (Jeffrey got a 200 in Open the third show so as not to be out done.) Nicky won 8 Novice classes with 5 All Breed HIT’s. In the next few months he finished his CDX and started on his UD. 2010 was a great year with Nicholas finishing his UD, Breed Championship, OTCH and UDX. He also won the Toy Group at the NOI and the Utility division and Rally Novice Division at the All Star Tournament. Nicky has been invited to the NOI every year since with more placements and ending up 12th on the second day in all breed competition. Nicky has 30 HIT to date and 27 High Combines. He has qualified to date 82 times in Utility with 38 wins. In Open which we do not always show in, he still has qualified 80 times with 27 wins. He is Jeannine’s first dog and one of the first toys to get a Obedience Grand Master title. He has 793 OTCH points and is currently 3rd in the Toy Group All time OTCH points. He has been the top toy in the calendar year several times. He has 77 wins to date. 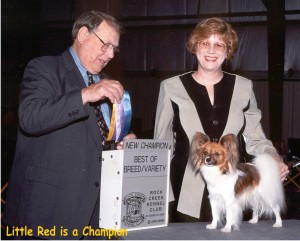 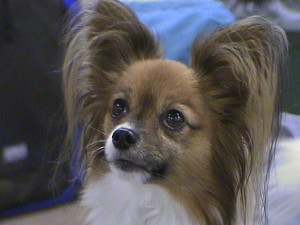 ABOUT STIENER: “Stiener” was Jeannine’s Mother’s dog and did not live with her. He was the first Champion she and her niece finished. He was three when Jeannine started training him for a CGC. In 2 weeks, he was trained well enough to pass the CGC with perfect attention the entire time. He was so good that a trial period was decided on and Stiener became an Obedience dog. Although only trained about 3 days a week, Stiener excelled and got his CD with upper 190’s scores. The highlight was a winning score of 199 and placing at an Allstar Tournament. He quickly got his CDX as well with the highlight being a first place in Open B. By the time he got to Utility he and Jeffrey were being shown to their Utility title at the same time and Gidget was still being shown so Jeannine got his first leg, then let Keith, her husband get the last 2 legs for her. Stiener went from beginner to Utility in just 4 years. Keith and Cecelia Servas, Jeannine’s sister, got Stiener’s rally titles.

ABOUT JEFFREY: “Jeffrey” was the easiest of Jeannine’s Champions to finish. He started off with a bang winning a 5 point major at Patriot Papillon Club’s Specialty. The same day Gidget went HIT there! Jeffrey was trained thru Utility by a year old. He went from Novice thru Utility in a year. The highlight of his Novice Career was a 199 from Paula Barrass. It took him 5 shows to finish his UD. Jeffrey was invited to the NOI several times and placed twice. Jeffrey has two 200’s at all breed trials one being combined with a 199.5 in Open! He is currently the #15 Toy Group all time with 264 OTCH points. He was retired early due to back and gastric problems. At 13 ½ he just completed his RAE. 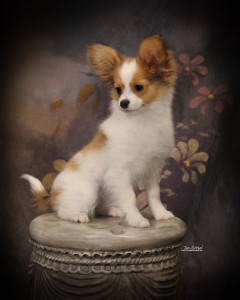 ABOUT CHLOE: “Chloe Cupcake” is our prettiest and tiniest pap. She loves to jump. Chloe has been the hardest dog Jeannine has trained as she has experienced fear issues that started with her first heat cycle. Still Chloe earned a 199 from Novice and recently finished her UD with a placement in Utility B. She now has two firsts in Open B with 2 HIT and a first in Utility B. She has 23 OTCH points and 2 UDX legs. She has come a long way and her accomplishments are very special. 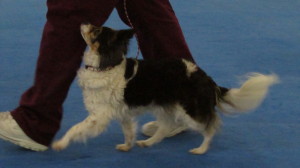 ABOUT MISTY: “Misty May” is a shelter dog who came to live at Papillonia 2 ½ years ago. She had been in the shelter for a year and would bite if strangers tried to touch her. Jeannine took her anyway. No Obedience career was planned but Misty May had other ideas. She showed Jeannine after just a few days living with her that she knew how to sit and to shake hands and to lie down. Someone loved her at some point in her life. So the journey started and Misty May has been a blast to train. She got her Rally Novice title easily with two 100’s and a 99 qualifying her for the Rally Nationals. Then she got her Beginner Novice title with a 199 and a 199.5 (and two first places) to finish! Of course Misty May no longer bites and is a happy and well adjusted papillon mix. Because of Misty May’s age it is uncertain how many titles she will earn but it will be fun for both handler and dog to accomplish! More than one judge has complimented her by saying she is the happiest dog they ever saw. 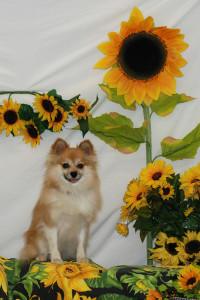 ABOUT ROSE: Currently Jeannine is also training “Rose” a Pomeranian who lives with her mother. Rose is from the York County SPCA and is about 3 years old. She is very high drive and gets high easily so this is a new challenge for Jeannine. 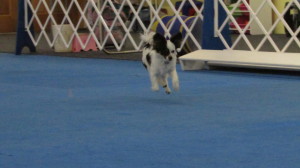 ABOUT JOSIE: Josie is the youngest of the bunch and looks very similar to Gidget. Half her face is white and the other half is tri, but boy is she different! She is extremely active and curious and loves to chew things up. Luckily she is very sweet, cuddly and very smart so she gets forgiven for her destructive ways. She is over a year old now and is doing very nicely in her training. She has been the star of many Facebook and YouTube postings. Another future OTCH we hope!

ABOUT SCAMPER: “Scamper” a rescue Toy Manchester Terrier was Jeannine’s first Obedience show dog. She began training him at 1 ½ years old. Buck-O-Man UD was scared of people and dogs and indoor noises. None the less he was a high scorer and very precise little dog. Unfortunately, the early instructors proofed way too much and too hard. It ruined Scamper’s stays. Still, he won first places on all his Novice runs and 2 of 3 in Open. In Utility he scored in the 190’s including a 195.5 on two of his legs. He only showed in a few Open B classes before he had his UD but placed in a couple of those. He participated in the Gaines Pupperonie Regional placing just out of the ribbons. He taught Jeannine much and she still uses some of those lessons today. 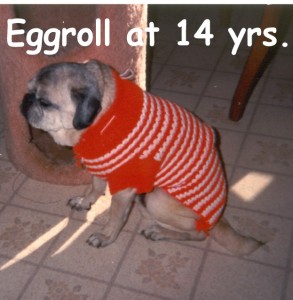 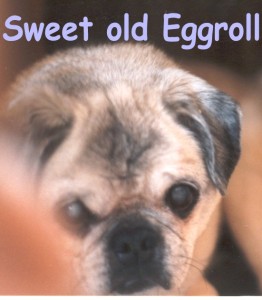 ABOUT EGGROLL: “Eggroll” the pug was the first of Jeannine’s mother’s dogs she trained. She began training him at 8 years old to learn more about training. He did get to match but never got any titles as when he was getting near to being ready he began having lameness in his rear. Eggroll was a rescue and was not well cared for before her mother got him at 5 and his body just started giving out. Eggy loved to heel and would push Scamper out of heel position if he was off leash. He stared intently at Jeannine at all times—including the stays. He was great fun to train and learned very fast. He gave Jeannine a life -long love of Pugs.